Can a person really exist without having a façade? The manifestation for visual arts Façade 2017 in Middelburg has invited artists to reflect upon this matter.  Whereas Façade 2012 was about the town as a mask, now the focus is on     people, who have the freedom and tendency to occasionally hide behind a mask.

With that human theme, Façade 2017 connects up with the Four Freedoms of Franklin Delano Roosevelt, former president of the USA, who still very much lives on in the 800 year old town of Middelburg. Not only by the presence   of University College Roosevelt but also because the town identifies with the Four Freedoms he formulated as a humane answer to the death and destruction of World War 11. His Four Freedoms (freedom of speech, freedom of worship, freedom from want and freedom from fear) were later to become the foundation of Universal Human Rights.

In the work they have made for Façade 2017, the internationally renowned artists explore the possible significance of a human being’s freedom to put up a façade. The art exhibited in Façade 2017 particularly wants to amaze us at the freedom that conceals and reveals. 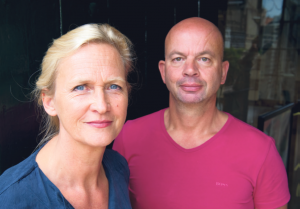